Challenger Insight: What Percentage of your Sellers are Highly Coachable?

For years, we’ve witnessed the power of coaching firsthand. Managers who provide their reps with effective coaching can improve performance by 19%. And in the absence of coaching, reps lose 87% of what they learned in training just 30 days later. But some brand new analysis has revealed a long overlooked truth about coaching…it takes two to tango.

Coaching by the numbers

According to our database of 26,000 seller assessments, 61% of sellers are rated by their managers as being highly coachable – a.k.a they actively seek out constructive feedback. On the other hand, resistance to coaching is rare in our survey population, only about 7% of sellers are rated this way.

We also see an interesting third group, or 32% of sellers, who are only somewhat open to coaching. When you put these three groups in context, an average sales team of 8 people will have 5 sellers who are highly coachable, 3 sellers who are ambivalent to coaching and maybe one who resists it strongly. Needless to say, on a small team, that makes a big difference. 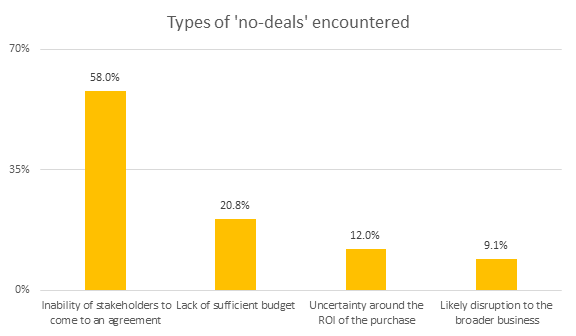 This next finding may come as no surprise, but being coachable, or looking for constructive feedback, makes a huge difference in terms of a seller’s likelihood to be a high performer. 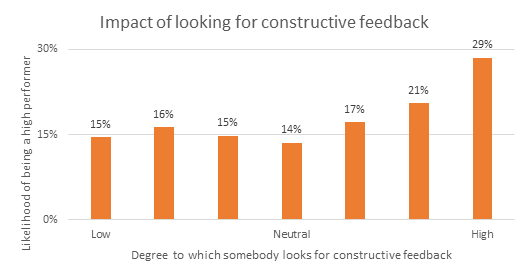 It’s not impossible to be a high performer without looking for feedback, but the data shows that there are real performance limits both among those resistant to coaching as well as those ambivalent to it. High performance likelihood spikes only among the most coachable sellers, who are almost 2x more likely to be high performers than their peers.

This raises an important point about successful coaching: it has to be a shared responsibility. It is not enough to have managers who are able and willing to coach. You also need sellers who are open to being coached.

One way for managers to tell is to listen to their sellers as they talk about the day-to-day. Do they use the language of improvement? Do they speak of gaps in their performance or of things they are trying to do differently? More tellingly, does the manager see them change behavior when the seller sees something failing to work?

Conversely, signs of a seller being resistant or ambivalent to coaching would be him/her speaking confidently about status quo, or attributing concerns to external pressures, competitor moves or the lack of marketing support?

When managers come across this talk, they shouldn’t immediately rush to confirm status quo. Instead, they should borrow a page from how they might approach a customer. Have a probing conversation around what else this seller might do to address the situation. The key is to spark in someone a personal interest to improve and then nurture that interest. If you can convert someone from resistance and ambivalence to sincere interest in coaching, you can improve his/her performance.

As a closing caveat, managers should resist the urge to jump to feedback with those resistant or ambivalent to coaching – they will just put their guards up. This is especially true when pushing an already high performer toward even higher performance. When no clear development opportunity exists, it’s better to help them find one rather than force one on them.

Timur has been conducting research for most of his career. He was part of the team that researched many of the original concepts behind Challenger. Mostly focused on trying to better understand how commercial organizations succeed, Timur has spent time working on everything from trying to understand consumer attitudes toward energy consumption to identifying best practices for hospital operations leaders. His passion is for trying to identify strategies that are more likely to deliver a desired outcome than any others.