According to Challenger data, only 29% of forecast deals convert into a sale. Those aren’t great odds. An entirely rational person might easily decide that the rewards don’t justify the effort: after all, the odds are literally stacked against them.

Luckily for businesses everywhere, we can still rely on a select few to defy the odds and deliver growth. In sales, a high performer typically delivers a multiple of the revenue of an average performer, often carrying an entire team, or an entire company.

Doing what it takes to be a high PERFORMER

There is, however, a cost to being a high performer and this becomes apparent when you look at the correlation between demonstrating discretionary effort (always going the extra mile) and high performance.

What is clear from the chart below is that high performance in sales usually demands intense levels of effort. It’s not impossible to be a high performer while giving a half effort, or even doing the bare minimum, but it’s highly unlikely. Those who demonstrate the highest level of effort are 3.7x more likely to be high performers than those who do anything less than a half effort. 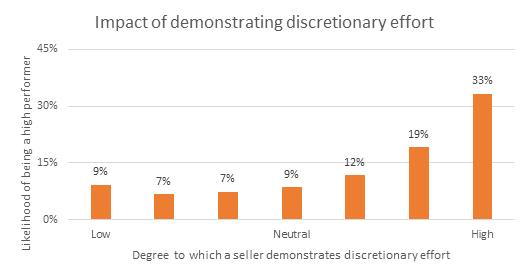 First, and this should be relatively easy to act on, managers should hire people with the right disposition. When making the go / no-go decision on a candidate, managers should screen specifically for a history of putting in extra effort at key moments.  They should look to diagnose what the candidate was truly “willing” to do to get the win (stay late, pick up the phone to schedule meetings, assemble decks, etc.) and, perhaps, what they might be “unwilling” to do (some task they see as beneath them or an arbitrary limit they’ve set to their effort).

Second, and companies are usually reasonably good at this, managers must be both conspicuous and consistent in recognizing and rewarding outsized effort when motivating the team. If you celebrate big wins (and you should) make sure to tell the story behind the win – particularly if that story highlights a combination of hard work, ingenuity and creativity. Also, managers should also motivate privately by recognizing discretionary effort while deals are ongoing, not just after they end in wins. Not all deals where a seller gives full heart and soul swing in the right direction. Recognizing the effort keeps them motivated to give the same the next time around.

Third, and perhaps most difficult, managers must keep their people fresh and balanced.  Even the best of the best can’t go full speed all the time. Effective sales managers watch closely the effort fuel in each seller’s tank. They encourage high effort when the tank is full and encourage rest and refueling when the take is low. In the same vein they make sure their people don’t have to beg and plead for resources, keep distractions and discouragement from administrative burdens to a minimum and help their people live rewarding lives outside of work.

Timur has been conducting research for most of his career. He was part of the team that researched many of the original concepts behind Challenger. Mostly focused on trying to better understand how commercial organizations succeed, Timur has spent time working on everything from trying to understand consumer attitudes toward energy consumption to identifying best practices for hospital operations leaders. His passion is for trying to identify strategies that are more likely to deliver a desired outcome than any others.